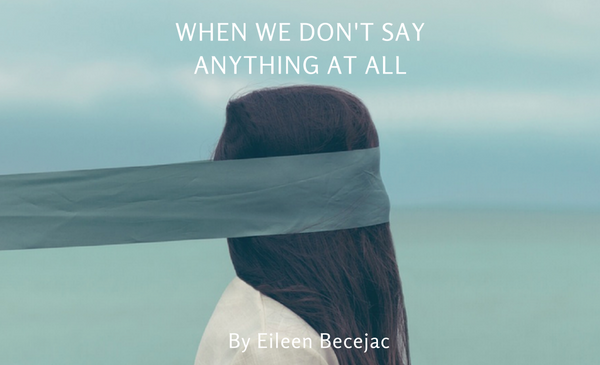 There used to be a time when I was afraid of causing a stir.

There was the job interview when I was fresh out of university when the male interviewer smoked a cigarette during the entire interview and nonchalantly blew the smoke into my face because he could, and I couldn’t say anything at all because I did not want to make a bad impression.

There was the time when I was on holiday in the South of France as a teenager and while I was just enjoying the beach view one evening, a male street vendor came and sat next to me on the bench and kissed me on the cheek…without my permission.

At each time of the above mentioned incidents, I had a feeling in my gut that this was not right.

Each time as a woman, I knew that if I had said something, it would have looked as if I was the woman waving her hand whining about her situation so at first, I did not say anything at all.

In light of recent events where a male presidential candidate, a potential leader of a country which possesses?nuclear weapons, appears to give the go ahead to commit sexual assault against women…

In light of the numerous stories I have heard from many women in the Newbold Sisterhood who have needed encouragement and support over the years, I would like to extend the same support and encouragement to:

1. Any woman who has not felt heard when she tried to voice her discontent.

2. All women pastors worldwide who still continue to serve despite the battles they face in their unequal status compared to their male counterparts.

It’s simply not enough nor acceptable that you quietly support women’s ordination.

When we don’t say anything, nothing changes or the situation worsens.

We must use our voices to stand up for each other.

We must call out what is unfair.

We must give hope to others and they can only know this if we show our support. Call it out for what it is – sexism, inequality, discrimination. For change to happen, we must acknowledge it occurs and then take the first action, that first step towards mending the hurts.