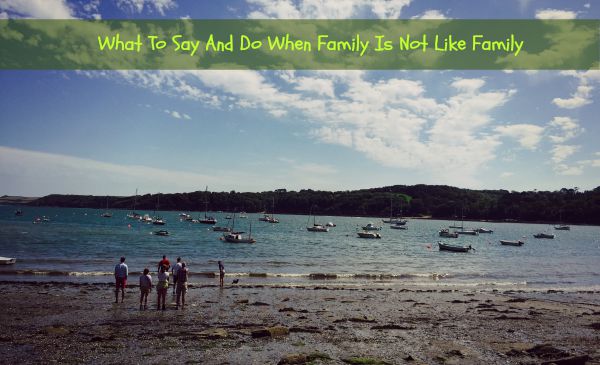 Sometimes it seems to take very little for a family to break down – it might start?in the form of an argument, a misunderstanding, or even a justified reason of never to speak to a person once very dear to you.

I have also noticed that after we might have already forgiven the?dear one who?had?previously offended us, they go on to?do the same wrong thing over and over again, and then we tend to label them, saying, “Well, she is like that…? or ??He always does this!?

What we tend to forget is that there have been?many events that might have lead to us being disappointed with one another in our families which could have been orchestrated by the evil one himself.

This story comes to my mind when I consider?the disappointment we might feel within our families at certain times.

How do you think Esau felt after he found out that his mother and twin brother had tricked him? Betrayed? Rejected?

To be fair, they did not act like a family from the beginning. The family was already split – ?with each parent loving the other son more than the other. The unravelling mainly started from when, in a moment of weakness, Esau chose?to give up his eldest son’s birthright to his younger brother, Jacob over a bowl of lentil stew. Then?later on in the story, his mother, Rebekah, and Jacob decided to put their full plan into action for Esau to not receive the Blessing from his father.

I truly believe that in our moments of weakness ?that we should be conscious?about what we?say and do ?in order to not allow ourselves to be?a canvas?for the devil to use his?deceptive tactics to cause hurt for those around us. Esau succumbed to his own weaknesses and was driven by hunger and willing to throw away what had already been promised to him.

Further?separation from the family on top of the pain and betrayal occurred when Jacob, fearing the reaction of Esau, ran away. A situation had been created between the brothers for Jacob to harbour guilt and fear, and for?Esau?to feel?resentment, anger and unloved by his mother.

Sadly, despite?the special bond that twins share, Esau and Jacob had to wait a long time before they were reunited.

Our ?very own families are susceptible to moments of weakness and we need to be aware these are the times that family, friends and even ourselves might unknowingly be allowing the devil to orchestrate situations.

The?good news in this story for me is that the revelation of God?s character is revealed!

God did not label Jacob as a thief, ?or liar, but blessed him. God also touched?Esau?s heart to forgive his brother eventually. God, in His way, was able to rebuke the devil and ?work things out for the good and bless both families.

Many years later, Jesus?taught us?how to handle issues we may face with our loved ones.

When Jesus had revealed His plan to the disciples, telling them that He was going to die, his disciple and friend, Peter, began to disagree with Jesus’ prediction on what was going to happen.

Interestingly,?Jesus did not rebuke Peter. Instead he spoke to the devil directly who He must have seen trying to manipulate Peter?s thoughts. Jesus said, “Get behind me, satan!” (See?Matthew 16:23)

I believe that this was because Jesus knows who is behind all wrong deeds, wrong actions, wrong words in this world.

Let us not place ourselves into positions where we can be manipulated, for example, by speaking ill of our loved ones, or like Rebekah, allow ourselves to be part of executing a ungodly plan.

Let us imitate Jesus, and even add our own words powered by Scripture in rebuking the devil and standing up against him.

For all of us who might feel that we might have been disappointed in our family members or even church family members, remember that they, like us, are essentially good people and the Potter, our Heavenly Father, has not given up on them and us. He already won the battle for us at Calvary and he is still moulding us into the best versions of ourselves.