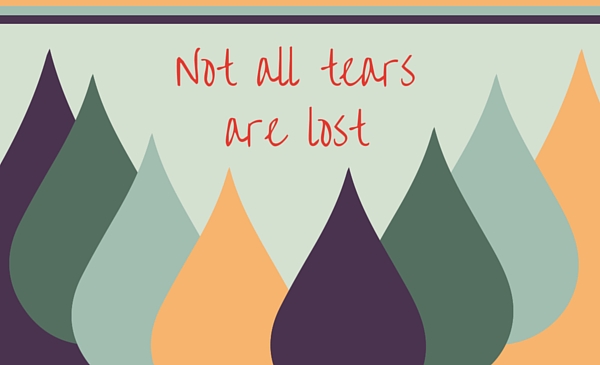 Not all the tears that we cry are lost. I believe that someone hears.

Nine months ago, I cried a lot.

I was distressed that my daughter was being asked to leave a private school she had been attending for 4 years. During this time, God had come through for us financially. So, why was He not coming through now?

I waited for Him patiently but there was no sign. I presented my case one more time to Him, and even told Him how it wasn?t nice to be messing about with the emotions of a 7 year old.

The whole thing was painful.

I took some walks of faith to the school – I sent emails around the world, and received no reply. I even imagined that if I had been presenting this matter to my late father,?my tears would have moved him into action. This thought made me sob even louder during the early hours of one morning. I had not slept as I was thinking of the action I would have to take later that?morning.

I ironed my daughter?s checked summer uniform and got ready to take her to school. The headteacher had already given me a final warning. Deep in my heart, I kept repeating, ?I am a child of the King?, but at this point, I did not know if I believed it.

So I cried aloud, not using the word ‘God’ anymore, not ‘Jesus’, but in my native language, chichewa, ?Bambo, anga muli kuti?? (?My father, where are you??). It was a combination of crying for my late father and to the Most High. I was in a desperate and confused state!

The reason I connected my crying to my father and God was that my father was always moved by my tears. If I cried, he was there to comfort me and would find a solution to stop me crying. Basically, if my own father ?did not want to see me cry, how could God ignore me? Where was He?

Months later, and now with hindsight, I?ve had time to reflect on a situation when my father did not change his mind on a decision he was making for me despite of?my pleas.

I was fourteen years old. I was transferred to a boarding school where I did not know anyone. I cried but my father did not drive back. His face had been sad, and yet his comforting words did not include a U-turn.

Instead he said, ?Stay for a few weeks. If this place is unbearable, let me know and I will come back for you.”

I understand now that he said this because he knew that during this time, I would have had the opportunity to experience his plan for my education and realise that truly Nkhamenya Girls Secondary was the best thing that happened to me.